The Hurricane
Book, Lyrics and Music by Bjorn Berkhout

Photos by Lloyd Mulvey
​While watching a theater production in Chicago an idea spontaneously hit me during intermission: ‘I bet The Tempest would work as a musical set on Fire Island’.

I instantly wanted a transgender woman character in the musical who was in a position of power and influence rather than being on the peripheral edge of society. Thus, the Prospero character was reimagined as Madam Sparrow, the owner of an inn on Fire Island who has come into possession of a magical monkey paw. Using its power, she brings her enemies to the island and working with her lackey Ariel manipulates them through the power of song to extract her revenge and reestablish her rightful role in society.

The musical balances comedy with drama (as does the original Tempest) with Madam Sparrow a potentially dangerous adversary with supernatural powers at her call and Ferdinand and Miranda being the pair of young lovers caught in her game. Ariel and Sebastian are the comic characters while Antonio remains the villain. Both Caliban and Alonso float between the worlds of darkness and humor making the production a cast of eight characters.

The musical was staged as The Hurricane at the 2014 New York International Fringe Festival to positive reviews. The show has since been renamed Lady of the Storm.

Any party interested in performance and continued development of this musical should feel free to contact me: info@bjornb.com

‘It is an admirable attempt in a difficult genre and casts a light on a contemporary theme that shines with integrity.’

‘It deals with revenge, ostracism, greed, morality and love. It invents a situation that is melodramatic but contained by the human condition and controlled by characters that do not fall prey to becoming the victims of stereotype.’

Excerpts from The Village
by Scott Stiffler

‘When somebody exits the theater humming a tune from the show they’ve just seen, you know you have a hit — but when a group spills out into the street, laughing boisterously as one of their own recites dialogue with affectionate precision? This is rock-solid confirmation that you’ve achieved that elusive goal every writer and performer aspires to: the creation of a catch phrase. That was the precise scenario I witnessed, following the FringeNYC premiere performance of Bjorn Berkhout’s often funny but ultimately somber musical adaptation of Shakespeare’s 'The Tempest.' Here was a satisfied patron of “The Hurricane,” gleefully invoking a memorable line from the opening scene, in which the lead character commands an act of supernatural favor from a mysterious relic: “Monkey paw: Draw forth a storm!”

As written by Shakespeare then nicely expanded upon by Berkhout to suit his gay fantasia premise (and his own solid moral agenda), most of the island’s inhabitants are basically decent souls laboring under some sort of false identity, unfulfilled desire or ill-advised quest. That they arrive at final act happiness in a manner having more to do with genuine humanity than monkey paw mojo is enormously satisfying.

Song Excerpts from The Hurricane 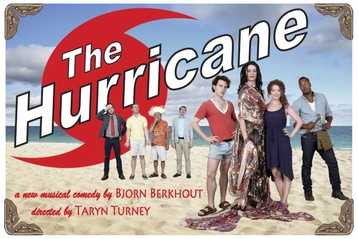